The other day, I saw an advertisement for a whiskey named “KIYOSU” in the subway train. It is manufactured and sold by Kiyosuzakura Brewery Corporation. The company is located in Kiyosu City, which borders Nagoya City. Speaking of Kiyosuzakura Brewery, “Kiyosu Castle Nobunaga Oni Koroshi” is their famous sake, but they also make whiskey, vodka, and gin as well. 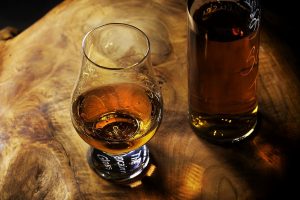 When I searched for “Kiyosuzakura Brewery” on J-PlatPat, 4 Japanese registered trademarks including ” KIYOSUJONOBUNAGA ” came up.
Japanese whiskey is one of the world’s five major whiskeys and is so popular that some brands are running out of stock. In addition, craft gin, which is flavored with botanical ingredients peculiar to the production area, is becoming more popular because it has a strong character. Both are interesting liquors. I would like to try it once. (Syszo)