The nights are getting shorter, the days are getting longer, and summer is gradually approaching. The rainy season has started in Nagoya and when looking up at the sky, it is cloudy and dull. The dazzling sunshine has faded into the shadows, and the trees in the city are drenched with rain.
New members of the insect family have appeared to accompany the season, and we can feel the change of the seasons.

By the way, did you know that the firefly viewing season is during the rainy season?
It is well known that fireflies can be found in places where the water is clean, the water flow is calm, and it is dark and quiet.
However, the Tobu Zoo (located in Saitama prefecture) has the world’s first “Hotarium” where you can see fireflies all year around. (time) 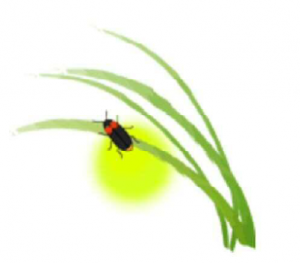 Hello, this is Hiro.
When I returned to my parents’ house the other day, I was shown the old medicine they found in the back of an old chest. When I shook the bag, I heard the sound of the medicine grains hitting the bag. 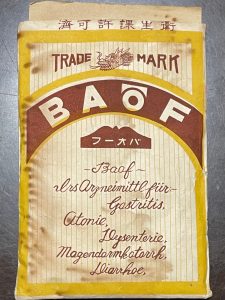 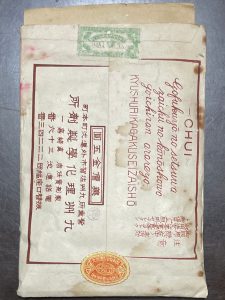 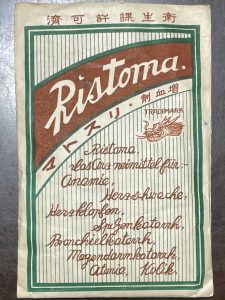 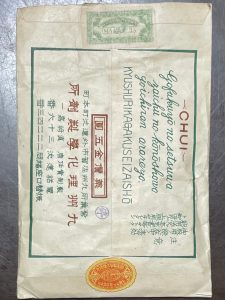 I searched the internet for words “BAOF”, “Baof (in katakana)”, “Ristoma”, and “Ristoma (in katakana)” written on the front of the bag, but I could not find any information on the corresponding medicine.
When I Google translated “Gastritis” and “Magendarmkatarrk” on the “BAOF” bag, they were translated as “gastritis” and “gastrointestinal disorder” from German. “Anamie” and “Herzklopfen” in the “Ristoma” bag were translated as “anemia” and “palpitations”. It seems to be a medicine to relieve or treat these symptoms.

The paper in the bag stated, “Showa 15” (1940), so I knew that the medicine was about 80 years old. It was probably used by our grandparents or great-grandparents’ generation.

On the back of the bag, it says “Yakuka Kin Goen” (medicine price 5 yen). When I converted the 5 yen at that time into the current money by referring to the following page of the Bank of Japan, it was about 2000 yen.
“How much would it be to convert 10,000 yen in 1965 into current money?” (Bank of Japan (Japanese))
https://www.boj.or.jp/announcements/education/oshiete/history/j12.htm/

I also did an Internet search for “Kyushu Rikagaku Seizaisho (Kyushu physics and chemistry pharmacy)” which is written on the back of the bag, but the corresponding pharmacy could not be found. It seems that this pharmacy no longer exists.

I searched for a Japanese trademark on J-Platpat to see if the dragon figure displayed with the letters “TRADE MARK” on the surface of the bag was registered.
When I entered “24.11.17” (Ryū (dragon in Japanese)) and “4.3.3” (dragon in katakana) in the “Classification of shapes, etc.” field, 1201 trademarks containing dragon figures were found (as of May 12, 2021). Furthermore, when “01B01” (drug, etc.) was entered in the “Similarity group code” field and additional conditions were added to the search, the number was narrowed down to 62 results. However, there was no registered trademark among these 62 results that was identical or similar to the dragon figure on the bag. It may have been registered as a trademark at that time, but it does not seem to be registered now.

My sister-in-law, who is a pharmacist, was interested in this medicine and said that she wants to look up on it so now it is in her possession.
If you know anything about this medicine, please let us know through the comments section.

The other day, I came across a very cute sweets called “Peko-chan Ningyo-yaki” from Fujiya Co., Ltd. As it is named, it is a ningyo-yaki (doll-shaped cake) that imitates the face of “Peko-chan” and has several flavors such as mashed sweet bean paste, smooth sweet bean paste, and custard cream. I chose “Uji Matcha” which was a limited time offer. The fluffy sponge matched the matcha cream and it was very delicious. I will buy a different flavor next time.

When I searched on J-PlatPat for a trademark related to this product, the trademark “GINZA FUJIYA Peko-chan Ningyo-yaki” was registered as the designated product “Ningyo-yaki” (Japanese Trademark Registration No. 6368159). It is used at the top of the product package in the photo below. (Sakuramochi) 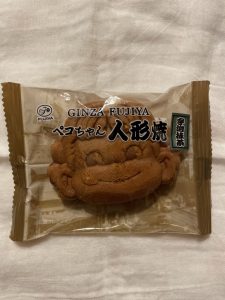 On the page of the electronic exhibitions, available on the National Diet Library (Japan) homepage, there is the exhibition “The Meiji and Taisho Eras in Photographs”.

You can see the old look of the city you know well and many people walking on the road. From looking at these photos, you can feel the passion of wanting to keep the images of what you see forever with a camera that was still rare in those eras.

According to Wikipedia, photography was invented in 1827 by the Frenchman Joseph Nicéphore Niépce. Until then, there was a projector that showed photograph-like images, but capturing moving images was not possible. (Swimmer)

History of photography – Wikipedia
Electric Exhibition Website: The Meiji and Taisho Eras in Photographs: From photographs in publications held by the National Diet Library – Tokyo, Kansai, Tohoku in Photographs (ndl.go.jp)

May 6th is registered as “Colocolo Day” by the Japan Anniversary Association from the puns of “co (5) lo (6) co (5) lo (6)”.
This was established in 2010 to commemorate the 25th anniversary of the trademark application for the adhesive carpet cleaner “Colocolo” developed by Nitoms, Inc.

It is a very simple name, but it seems that it was a different product name when it was first released. However, as a handy cleaning tool, it is interesting that everyone in Japan probably recognizes “Colocolo” is an adhesive carpet cleaner. (Syszo) 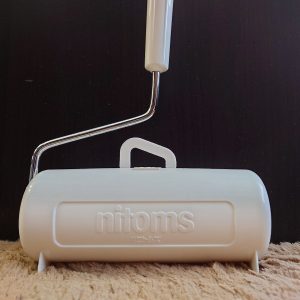 For the trademark “Colocolo”, its application was filed on February 20, 1985 and registered on May 29, 1987.
J-Plat Pat Trademark Search “Colocolo” (Click “English” on the top right of the page)

* “Colocolo” is a registered trademark of Nitoms, Inc.