Thank you for your continuing support and cooperation.

We would like to express our sincere gratitude to you for entrusting us with your patents, utility models, designs, trademarks, and other intellectual property rights for many years.

We are pleased to announce that we have established a Patent Professional Corporation.
Until December 2021, we were representing as an individual agent (in the name of Masaki Hattori), however, from January 2022, we will be shifting to representing as a corporation.

We are convinced that due to the establishment of a Patent Professional Corporation, we will be able to continue to provide more detailed and higher quality services to our clients in response to their various requests regarding intellectual property.
In particular, we believe that we will be able to provide a wide range of services in the areas of protection of intellectual property rights such as patents, utility models, designs, and trademarks in Japan, exploitation of such rights, anti-counterfeiting measures, and consulting.

With the establishment of the Patent Professional Corporation, all of us at the firm are determined to devote ourselves even more to our work.
We would like to take this opportunity to ask you for entrustment of new patent/utility model/design/trademark applications in Japan.

I would like to introduce a pack of sweets that I like recently. It is “Country Maam Chocomamire” by Fujiya Co., Ltd.

This sweet is made of chocolate dough of “Country Ma’am (popular Japanese sweets)” (with chocolate chips) coated with milk chocolate and it is really a full of chocolate as the name suggests.

When you hear this explanation, you may think that it would be “extremely sweet”, but it is not as sweet as I thought it would be, and it is moist and very easy to eat. Would you like it to accompany a long autumn night reading? 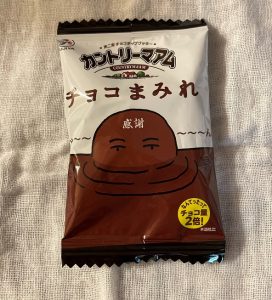 On my home PC, I use a trackball instead of a mouse. I think most people prefer mouse, but I’m for trackball.
In the case of a mouse, the mouse body is used to move the cursor on the screen by sliding it on the desk, but the trackball is the one that rolls the ball with your finger. It takes some time to get used to it at first.

The advantage of the trackball is that it can be used without moving it, which saves space, and the cursor can be moved without moving the arm, so there is less strain on the wrist and shoulders and mouse tendonitis can be prevented.

I started using it because I hurt my wrist while exercising, but the other day the trackball broke, so I replaced it.
The new trackball is ERGO M575 made by Logicool Co., Ltd.. As the name implies, it is a product that incorporates ergonomic design. You can use it without twisting your wrist at an unnatural angle, making it even more comfortable. 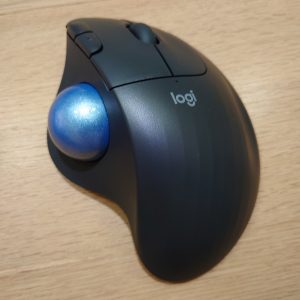 Logicool Co., Ltd. is a well-known brand of computer peripheral products and is a Japanese subsidiary of Logitech International, headquartered in Switzerland. The company has developed its products under the Logitech brand worldwide, but it seems that Logicool brand is used only in Japan. That is because Logitec Co., Ltd. already existed when the Japanese corporation was established. Logitec Co., Ltd. is also a company that deals with computer peripherals, and the trademark application of “Logitec” was filed in 1974, before the founding of Logitech in Switzerland.
The products of both companies are familiar to me and I have used them frequently for some time. (Syszo)

I saw illustrations in which the interesting image processing application was used, were shared on SNS that I use personally. The app is free to use and looks very fun so I wanted to try and use it. However, when I looked at the privacy section of the application store and the reputation on the internet, the terms said that the copyright, intellectual property rights, other rights of the pictures and images you drew are given to the sales company and the affiliated companies of the app so I decided not to download it.

This kind of wording can be seen in other apps, and it may be an unnecessary worry, but I think it’s best to be careful because the data you created may be used by third parties. (Swimmer)

Kaki-no-Tane is a rice snack that I have been familiar with since I was little.
I went to buy some Kaki-no-Tane to see the position trademark registered by Kameda Seika Co., Ltd.
There are several kinds of Kaki-no-Tane, and on every package, there was the same trademark. 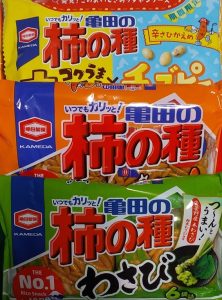 The text trademark on the package I bought this time is “Kameda Seika Kameda no Kaki-no-Tane” by Kameda Seika Corporation, Japanese trademark registration No. 4991187, registered on September 29, 2006.

The position trademark for Kameda Seika Co., Ltd. is Japanese Trademark Registration No. 5873740, registered on August 12, 2016.
Comparing the content of the currently registered positional trademark with the packaging I bought this time, the part that says “consisting of a figure attached to the upper left portion of a packaging container for rice crackers or bean confectioneries” and the part that says “a horizontal hexagon with a red bold line” are the same as the registered positional trademark, but the part that says “a vertical short ribbon shape in blue and the portions bordering both its left and right sides in white” is different.
The upper left part of the package I bought this time was not a ribbon shape, but a trapezoidal shape.

I thought that the positional trademark was easy to impress with its shape and color. Next time I buy Kaki-no-Tane, I would like to look at the trademark on the packaging. (Raspberry)