In summer, I have an urge to eat something that is spicy. We stock ” Karakara Fish Ramen (Karakarauo) ” cup ramen at our house so that we can eat it whenever we want. 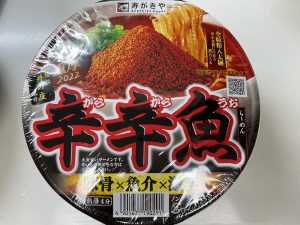 I’m a spiciness-resistant person, but this cup ramen is quite spicy, so I prepare a drink to neutralize the spiciness and a towel to wipe the sweat, and prepare everything before I start eating it. It’s impossible to eat completely with half-hearted attitude, but it’s not only pungent, but also pungent including delicious taste sensation, and I’ll want to eat more naturally after a while.
I would like to get through this summer with ” Karakarauo “.

*They also have a branch in Nagoya,Japan.

Thanks to the unique evolution of food culture here in Nagoya, many people visit the city for “Nagoya-meshi” (Nagoya food).
One of the most popular Nagoya-like sweets is “Piyorin,” a chick-shaped cake. The delicacy of the cake, which is susceptible to shaking and quickly crumbles, has made it so difficult to take home that the term “piyorin challenge” has been coined.

Did you know that there was a sweet called “Shachibon,” which was the predecessor to “Piyorin”? The other day, “Shachibon” was revived after an 11-year absence and has become a topic of conversation. 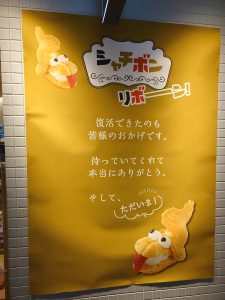 “Shachibon” is a cream puff in the shape of a charming orcas with strawberry tongues sticking out, and is sold at “Cafe Danmark” located at the Nagoya Uimaimon-dori Hirokoji Exit of JR Nagoya Station from 2:00 pm. It seems to be sold out every day, but if you have a chance, please try it. 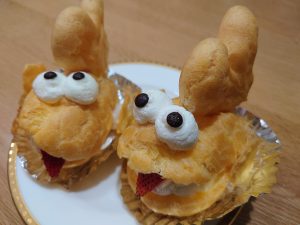 The rainy season began in the middle of June in the Tokai region where our firm, Hattori & Partners is located, and even as I write this blog, it is raining and gloomy outside.
During this season, I always take a folding umbrella with me when I go out, and every time I put a portable umbrella in my bag, I feel that it has become much smaller and lighter than it used to be, which is another advancement.
When I search for “umbrella patent” on the Internet, I see various umbrellas that have been devised from various aspects, and just reading about them makes me excited and want to try them. The plastic umbrellas that abound in the streets are convenient and easy to use, but it is the season to be interested in the latest umbrellas that have been devised with new functions and materials.

Well, the rainy season is finally here! but this year’s rainy season seems to have rushed away. Once confirmed, it is expected to be 13 days, the shortest since statistics began in 1951. That’s a surprise, isn’t it? (Swimmer)

It is June and I am looking forward to the blooming of the dahlias that I planted the bulbs in April.
The blooming period of dahlias is generally June to November. It appears that a design and two or more trademarks are used for this dahlia package. 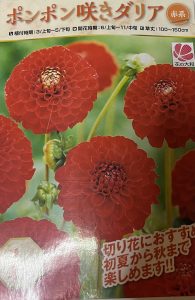 The backing paper in the photo attached to the mesh bag that contained the bulbs was registered as “backing paper for an article” Japanese Design Registration No. 1068135.
Hana-no-Yamato Corporation, a general gardening manufacturer, seems to own not only the registered design and the registered trademark but also the patent. (Raspberry)

On October 26, 2020, Japan’s Prime Minister Suga (at that time) declared in his policy speech to the Diet, “We aim to achieve a carbon neutral, decarbonized society by 2050”. This declaration was also extended to the Japan Business Federation. Now, a year and a half after October 2020, I checked the published gazettes to verify whether the number of patent applications related to carbon neutrality surged along with this declaration.
I searched the Patent Information Platform (J-PlatPat) for the number of gazettes containing the term “carbon neutral” in the specification by year of application, and found the following results (as of May 31, 2022). 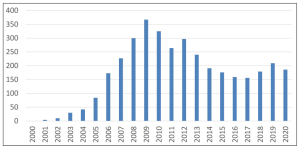 Already in 2001, there were applications with the term “carbon neutral” in the specification. For example, in Japanese Patent Publication 2003-129058, it is stated that “Biomass, in particular, is carbon neutral and should be actively used to replace petroleum, coal, etc., in order to fulfill the international commitments made at the Kyoto Conference on Climate Change Prevention (COP3).” This seems to reflect the growing interest in global warming and climate change triggered by the Kyoto Protocol of December 1997.
Subsequently, the number of applications describing the term “carbon neutral” increased, but peaked in 2009 (the year COP15 was held in Copenhagen) and has been declining since then, with a leveling off trend since around 2015. Incidentally, the Paris Agreement, which sets reduction targets for each member country, was adopted at COP21 in 2015. As of the end of October to the first half of November 2020, when Prime Minister Suga’s declaration was made as introduced at the beginning of this report, there was no particular upward trend in applications.
I hope that many carbon neutral related inventions will be created for the future global environment. (Conan)

“Kazuchee” is a popular appetizer sold at Kaldi and other stores. It is one of my favorite appetizers because of the unique crunchy texture of herring roe inside the cheese. I eat it not only as an appetizer but also as a snack… 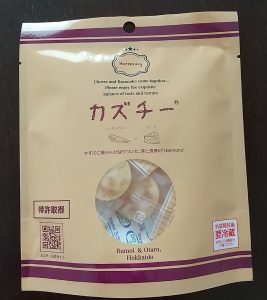 On the package I just bought the other day had the words “patented” on it! I don’t remember much about this before, and there is no mention of “patented” in the package photo on the online store of Ihara & Co., Ltd., the manufacturer.
I got curious, so I looked it up on J-PlatPat and found that it was registered on August 31, 2021. (Japanese Patent No. 6936457, Article 30, Paragraph 2 of the Patent Law, with an exception for loss of novelty)
As I thought, it was a relatively new patent! (Marron)

Aomori was the first prefecture I had traveled domestically by plane. I thought it was very far from Nagoya, but I was actually surprised in 80 minutes from Komaki Airport. It was cold in Tohoku as expected, but the food was very good. Above all, the seafood was excellent. At the Aomori Fish Center in Aomori City, I made an original seafood bowl. 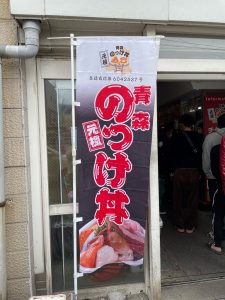 How to Use
1. Purchase “Nokkedon” meal tickets (10 tickets: 1,500 yen, 5 tickets: 750 yen)
2. Go to exchange the tickets for rice bowl (normal serving: 1 ticket, large serving: 2 tickets)
3 Exchange for your favorite toppings from about 30 stores in the building (the number of tickets varies depending on the store and the amount of toppings)
4. Completion of the original seafood bowl! 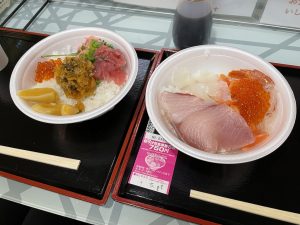 There are about 30 stores, and I was very confused about which store to exchange for which toppings. I felt that communication with the clerk at each store created a cozy atmosphere in the place.
If I have a chance to go to Aomori again, I would like to visit. (Rabbit)

Today, I would like to introduce an invention that is closely related to May 23rd. What I would like to Introduce this time is the “flying machine”(Flugapparat, Flying machine) invented by a German inventor born in Prussian and famous as a pioneer of aviation technology Otto Lilienthal (1848.5.23 ~ 1896.8.10). Otto Lilienthal was born 174 years ago today in Anklam, Pomerania, Kingdom of Prussia (current Mecklenburg-Vorpommern, Federal Republic of Germany).
Otto, who became a design engineer, began researching manned flight in 1867 with his younger brother Gustav. Except when he served in the Franco-Prussian War, he energetically developed hang gliders. At the start of the experiment in 1891, the flight distance was about 25 m, but in 1893 the flight distance was extended to 250 m, and in 1894 it was patented in the United States. He has conducted more than 2,000 flight experiments in total, but in 1896 he suffered a crash and died of a cervical spine injury.

Lilienthal is known not only for conducting flight experiments, but also for developing steam engines. The steam engine was one of the safest small steam engines of the time, and the profits gained could be used to fund flight experiments. He has obtained 25 patents in his lifetime, four of which are related to flight technology.
Lilienthal’s flight experiments attracted public attention as they were widely reported not only in his native Germany but around the world. It can be said that he left various influences such as inspiring the Wright brothers and built the foundation for the current aviation technology. 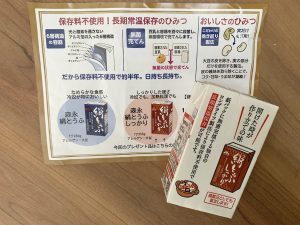 Its shape makes it easy to store, making it ideal for rolling stock. In the event of a disaster, you can replenish the protein you want to ingest with particular awareness.

I thought whether they obtained patents for the technology making it last longer at room temperature, but there was no display on the homepage.
When I searched J-PlatPat with the keywords “Morinaga Milk” and “Tofu”, 26 patents were hit. Patent applications such as the title of the invention “Filled soybean curd-like food and method for producing the same” may be related techniques.

Well, it’s the essential taste, but I don’t know because I haven’t eaten it yet. Since it can be stored for a long time at room temperature, I would like to keep it in stock and eat it when the expiration date is approaching.
In 2020, they introduced the special “grinding and squeezing method” and renewed it more deliciously! ,and you can expect it. If it tastes good, it will be a candidate for stockpile♪ (Cacao)

The other day, I bought a matchbox as a disaster prevention goods.
I don’t usually have a chance to use them, but when I look at them again, I find the illustration of the matchboxes to be unique and wonderful. 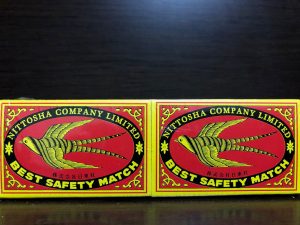 In the past, matches were often used as advertisements in stores, and we often saw cute matchboxes with elaborate designs. The original design by the manufacturer without advertisements creates a retro atmosphere, and it seems to be collectible item for enthusiasts.
It is understandable that enthusiasts collect them. (Time)