I found out that Hotel Sacher in Vienna was running a limited-time campaign to send sachertorte with free shipping worldwide, so I ordered it.

Sachertorte is a cake made by coating the entire chocolate-flavored sponge with chocolate, which was invented by the cook Franz Sacher in 1832. It was served at the restaurant and cafe of Hotel Sacher, which was later opened by his second son Eduard and that seems to be the beginning of sachertorte.
The recipe was kept secret from the public, but when the hotel fell into financial difficulties, Demel, a confectionery store that served the royal family of Vienna, obtained the right to sell it,
After that, the recipe became widely known, and Hotel Sacher filed a lawsuit against Demel seeking an injunction against the use and sale of trademark rights, but after seven years of trial, both sides were accepted to sell sachertorte.
As a result, Demel’s Sacher Torte is sold as “Demel’s Sachertorte ” and Hotel Sacher’s is sold as “Original Sacher Torte”.

The Original Sacher Torte I ordered arrived safely withstanding the heat. It fits perfectly in the wooden box and did not crumble. 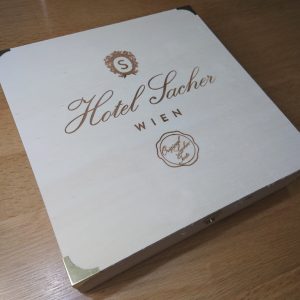 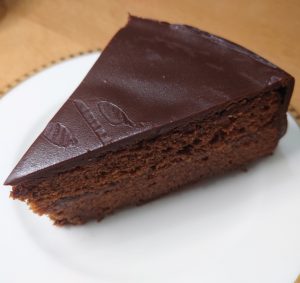 The cake is intensely sweet and dense, but the sour apricot jam sandwiched in between the sponge accentuates the flavor. The sweetness of the cake can be softened a bit by serving it with sugar-free whipped cream, just like the one served at the hotel. In the coronavirus crisis, I was able to have a valuable overseas experience. (Syszo)