Recently, I received a sponge cake (castella) from Nagasakido. When I took off the paper on the back of the sponge cake, the rough texture of the coarse sugar was scattered and it looked like a pattern. It was delicious.

Looking at the wrapping paper and historical writings, the shape of the ship says “Kurofune Denrai”(= meaning to be imported by the black ships). I only had the head of “Black Ships are Perry’s steamships”, so I was curious, and looked it up a little. According to “Free Encyclopedia”, all large Western-style ships that have visited Japan since the 15th century were the “black ships”. Speaking of which, sponge cake (Castella) was also brought in by trade with the Portugal, and it is certainly “Kurofune Denrai”.

Nagasakido’s “Kurofune Denrai” was registered in 1931 (Japanese Registration No. 229713). There are various brands of sponge cake (castella), but it seems that the only trademark with the ship mark is that of Nagasakido. 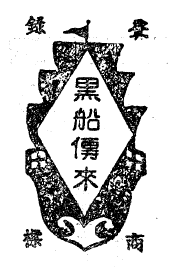 By the way, sponge cake (castella) is commonly called Nagasaki castella, but it should be noted that “Nagasaki castella” is now a regional collective trademark (Nagasaki Confectionery Industry Association, registered in 2006, Japanese Registration No. 5003044).
(blink)